Hwange District is located in the north-western part of  Matabeleland North Province of Zimbabwe with a population of 133 940 habitants. The district sits on a total area of …..km² of which…..km² constitute Hwange Communal.   Its northern borders is defined with Zambia by the Zambezi River while its western boarder is shared with the country of Botswana . Tsholotsho, Binga and Kusile districts are in close proximity.

The District falls under Agro-Ecological Regions IV and V in the North and South respectively. This is a semi-arid area, which receives less than 650mm in region IV and 500mm in region V of rainfall per annum. The rainy season normally runs from November to April, while the rest of the year is the dry seasons.  Soils are predominantly the Kalahari sands.  Locally Kalahari sands are termed igusu.  The landscape is generally undulating but rugged and hilly in Hwange Central. Altitudes are between 930 and 1200m above sea level. The major rivers are Deka,, Gwayi, Lukosi, Matetsi and Zambezi. The first three are seasonal. The farming system in Hwange is semi-extensive mixed farming involving small stock and cattle production as well as growing of rain fed crops – maize, sorghum, pearl millet, groundnuts and cowpea among others. Wildlife also contributes significantly to the economy of the district. During the winter months some households do gardening.

There 45 health facilities of which 10 owned by the local authority. 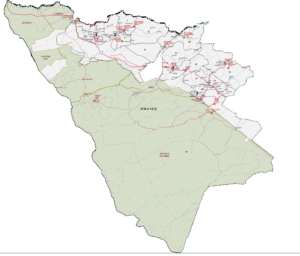